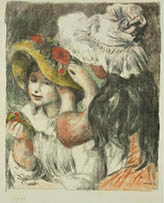 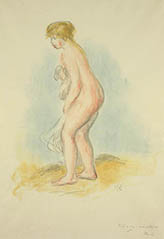 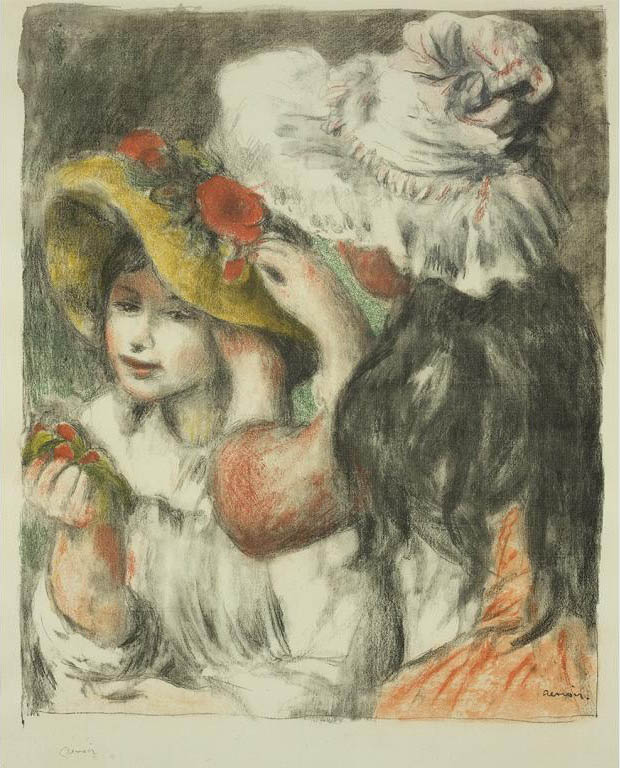 Pierre-Auguste Renoir, one of the masters of French Impressionism, was commissioned by art dealer Ambroise Vollard to create this lithograph. Alfred Stieglitz acquired the print from Vollard after he exhibited it in his 1910 group exhibition featuring works by Renoir, Manet, Cézanne, Toulouse- Lautrec, Rodin, and Rousseau.

Pinning the Hat is a highly detailed print, produced through a complex process that required a separate print-run for each color. It is also one of Renoir’s largest prints. The subject is Julie Manet, Eduard Manet’s neice, the daughter of painter Berthe Morisot, whom Renoir used frequently as a model. She is pictured pinning flowers on the hat of her cousin, Paulette Gobillard.

This work was based on an earlier study Renoir produced during a family holiday on the northern coast of France. There are several versions of the scene, including a pastel and an oil painting made in 1893, and subsequently, three etchings and three lithographs. This lithograph demonstrates Renoir’s signature Impressionistic style, with light markings and vivid colors that capture the changes of shifting daylight.